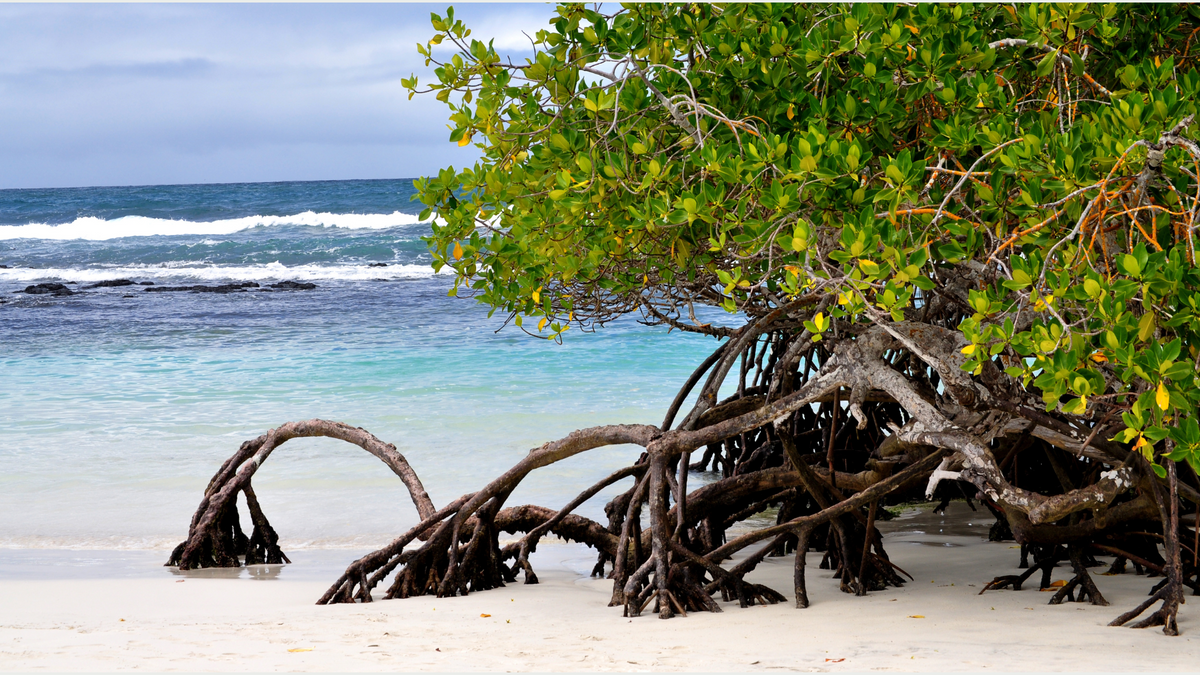 As the largest long-term carbon sink on the planet—storing and cycling around 93% of the world’s CO₂—the ocean plays a critical role in managing our climate. Over half of all biological carbon is captured by marine living organisms, which can store significantly more carbon by area than forests on land.

Yet these “blue carbon” ecosystems are among the most threatened ecosystems on Earth, and are being degraded and destroyed at alarming rates. Aside from destroying critical biodiversity, this decline transforms these rich carbon sinks into active contributors to climate change.

What is blue carbon?

Carbon is an extremely colourful element—at least, in the scientific community. In addition to being green, black, and red, carbon can be blue, brown, and teal. These colour codes are useful shorthand for describing the location of carbon in the world’s ecosystems. Blue carbon simply describes carbon sequestered, stored, and released by ocean ecosystems.

Coined by the UN in 2009, the concept of blue carbon is still relatively new and to date has mainly been used to group three major coastal ecosystems together: mangroves, seagrasses, and salt marshes. These marine ecosystems absorb CO₂ from the atmosphere and water, and store it either as biomass in their leaves, stems, and root systems, or in the soil of the seafloor. Together, these three blue carbon ecosystems account for 70% of all carbon in marine sediment.

Other marine vegetation, like seaweed, kelp, and maerl, also represent dense forms of blue carbon. Marine animals and organisms, like phytoplankton and bacteria, can also store blue carbon—both while alive and in the shells and skeletons they leave behind.

The rate of blue carbon ecosystem decline is estimated to be one of the highest on Earth, with up to 980,000 hectares of mangroves, seagrasses, and salt marshes being destroyed every year. These coastal wetlands are being lost at rates between 1-2% each year; while this may sound small, on the scale of a century it paints a bleak picture. Tidal marshes have already lost 50% of their historic global coverage, and mangroves as much as 67%.

This ecosystem loss is both a direct result of destructive human activities—including aquaculture, agricultural runoff, pollution, offshore drilling, coastal development, and dredging—and the rising sea levels and temperatures of climate change itself.

Why are blue carbon ecosystems so important?

In addition to being extremely effective at sequestering carbon, blue carbon ecosystems provide a variety of important ecological services, which include:

The significance of blue carbon in tackling climate change

Protecting and restoring blue carbon ecosystems is critical for climate change mitigation—offering up to 14% of the mitigation potential from ocean climate action required to keep global temperature rise within 2℃ above pre-industrial levels. Here’s why blue carbon offers such a huge opportunity for tackling climate change.

Blue carbon ecosystems are among the richest carbon ecosystems on Earth, able to store and sequester more carbon by area than many other natural carbon sinks. To put that in perspective, mangroves, salt marshes, and seagrasses cover less than 2% of the planet’s surface, but store over 50% of all oceanic carbon.

One of the most carbon-rich ecosystems on the planet. Can store up to 10 times more carbon by area than forests on land.

Almost all blue carbon is found in the soil, which can be several meters deep. They can sequester up to 4 times more carbon than mature tropical forests.

Cover 0.1% of the world’s ocean floor but sequester around 18% of oceanic carbon, and can store 2 times the amount of carbon held by terrestrial forests.

The permanence of stored blue carbon

The unique conditions of coastal ecosystems allow them to store carbon in their sediment for longer than many soils on land. Reduced levels of oxygen in coastal soils and the presence of salt means dead organic matter takes longer to decay. This gives more time for new layers of biomass to build up, creating a huge density of stored blue carbon. As a result, coastal wetlands can store carbon up to six meters into the seabed, whereas soils on land typically only store 30 centimeters of organic matter. This all serves to trap carbon in the ground for longer—in some cases, for 1,000 years or more.

While blue carbon ecosystems are powerful carbon stores, when destroyed they can quickly become aggressive agents of climate change. Cutting them down effectively unlocks the masses of carbon stored by these natural sinks, returning it to the atmosphere and ocean. Mangrove deforestation alone accounts for up to 10% of emissions from global deforestation, despite occupying just 0.7% of the planet’s surface. The combined loss of mangroves, salt marshes, and seagrasses is estimated to release 1.02 billion tonnes of CO2 each year—or nearly 20% of emissions from global deforestation.

Blue carbon ecosystems offer a critical line of defence for coastal communities hit by severe weather events and sea level rise. They act as essential green infrastructure, protecting those on shore from storm surges, flooding and erosion. As prime habitats for fish and biodiversity, they also provide food security. Loss of these ecosystems, therefore, limits how coastal communities are able to adapt to the increasing challenges of climate change.

The ubiquity of blue carbon

Blue carbon ecosystems can be found across the globe: seagrasses grow on every continent except Antarctica, mangroves can be found in 123 countries, and tidal marshes span the largest area of all three, covering 140 million hectares of the planet’s surface. This presents a wealth of opportunities for governments, businesses, and individuals to address the blue carbon ecosystem loss on a scale that is local and meaningful to them.

How you can support blue carbon projects

While nature-based climate solutions to climate change on land are gaining increasing support and prominence, conservation of blue carbon ecosystems lags seriously behind. It’s hard to make the case for protecting seagrasses, for example, when terrestrial forestation projects offering cheaper, easier, and larger-scale operations are available.

Yet blue carbon projects do exist. They work to build both local and national capacity to conserve and develop coastal ecosystems, helping to keep blue carbon locked into the seabed. The majority of these focus on mangrove, seagrass, and salt marsh restoration, but exciting new projects seeking to protect other blue carbon ecosystems, and oceanic sediment itself, continue to be developed.

Support from the private sector will continue to be critical for the long-term success of blue carbon projects, providing a stable stream of capital to enable communities to take lasting climate action and create more sustainable blue carbon projects.

Sign up for a free WeCHOOOSE account to start supporting blue carbon ecosystem conservation while compensating for your company’s unavoidable carbon footprint. You only pay for the impact you want to make and your contribution goes directly to a diverse portfolio of high-impact, rigorously verified blue carbon projects around the world.

Are you looking for a solution to deliver seamless, high-impact climate compensation options to your customers? Reach out to our CHOOOSE Connect team, and we will help provide suitable tech solutions and climate solutions based on your preferences. Sources